1.9. The Structure of the Periodic Table

In a modern periodic table, the atoms are ordered by atomic number.

The groups of the periodic table are the vertical ↓ columns. The atoms in the same group contain the same number of valence electrons.

The periods of the periodic table are the horizontal → rows. The atoms in the same period contain the same number of electron shells.

Trends in the periodic table 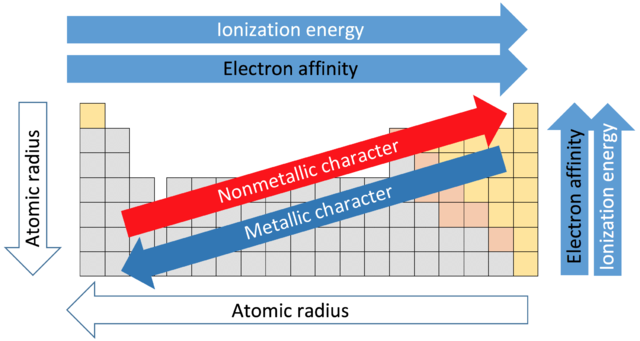 Trends in the periodic table. The arrows show an increase in the specified character.

Metals are generally to the left of the periodic table, nonmetals to the right.

Reactivity increases downward in groups 1 and 2 because of lower ionization energy.

Reactivity increases upward in groups 16 and 17 because of higher electron affinity.

To learn by heart

[Open the learning check in a new window.]