John Dalton (1776–1864).Democritus first suggested that matter may be made of indivisible particles = atoms. John Dalton provided the first scientific atomic theory (based on experiments) supporting the idea of "atoms" (1805).

Thanks to Dalton's new theory, elements can be said to be made of atoms. Jöns Jacob Berzelius compiles a table with the relative masses of the then-known atoms (1818), which are later used by Dmitri Mendeleev to organize the periodic table (1869).

Characterizes the radiation from e.g. radium (1896).

Nobel prize in physics 1903 (together with her husband Pierre, and Henri Becquerel).

Uses a cathode ray tube to discover and characterize the electron (1898).

The electrons are spread throughout the atom, like plums in a plum pudding.

Problem with Rutherford's model: The electrons should immediately fall back into the nucleus.

The visible spectrum of hydrogen. 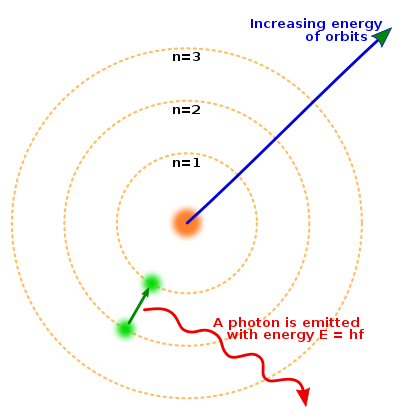 When an electron moves from an outer shell to an inner, light of a certain wavelength (energy) is emitted.

Summary: The building blocks of the atom

[Open the learning check in a new window.]